Last weekend we did some major grading, pulling the artificially high “flower bed” that had been created around the front of the house away, to allow for better drainage of rain water after major storms. The flower bed had been edged with large field stones, which looked to have come from an old foundation or stone wall. Sam had the idea of building a new stone wall as a border between the back yard and the adjoining field – where Tina had started to create some sort of shady flower beds under the existing tree line. None of the guys were keen on this idea (probably realizing that they would have to help with the heavy lifting for a project bound to take months), but Tina found basic instructions for a mortar free stone wall – with pictures – and the first stones were sorted into piles. There are literally tons of such stones around the house and fields, so theoretically, the wall may become a reality. 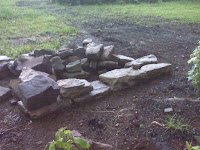 We also ended up rototilling and raking the newly graded front yard sections, sowed grass seed and covered the seeds with some of the left over dry hay from the barn. We had to water this for two days, until luckily it rained all day Wednesday. Hopefully this grass seed will sprout OK – to match the rest of the front yard, which we seeded a few months ago (first grass appeared right around Easter) 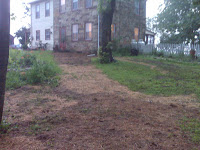