We are on the way to break our canning record for total jars – and varieties of food – canned in one weekend. Granted, we had a lot of help, as Anja & Duff and Zach & Rachel were around all weekend, and Jens and Grace stopped by on Saturday. 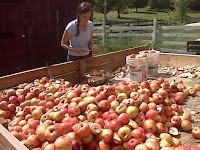 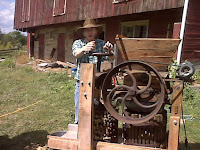 We started off on Saturday morning picking tomatoes and then picking through (and cleaning) a pick-up load of apples, which we ran through our apple press.  It was a beautiful morning, not too hot and windy enough to keep flies away (had a lot of bees buzzing around us though).  We ended up with  about 40 gallons of apple cider.
While the cider was being made, Rachel – and Toben –  worked on cleaning the tomatoes for the first batch of sauce for the weekend. 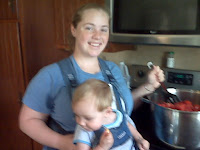 Jens and Grace stopped by and brought along half a bucket (5 gallon sized) of assorted hot peppers from their garden and a 50 pound bag of onions from Sams Club.  In the afternoon, Duff came up with his first batch of original salsa – which we called “Duff’s Smokin Salsa” (it contained chipotle and ancho peppers and we roasted the onions before adding them).  Today (Sunday) we canned some of the cider,canned some peaches, started a batch of apple wine, made another batch of salsa (this one was a milder variety), made apple sauce and nectarine sauce (some we mixed 50:50), and canned all of this, and cooked enough tomatoes for another batch of sauce. 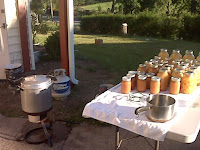 We used the burners on our kitchen stove, the side burner on the gas grill and the turkey fryer outside, as we just ran out of space in the kitchen during all this processing.  In the middle of all this, we all went to Chambersburg to watch Lars and the Big Spring Midget Football varsity team win their first game of the season.  Go Bulldogs!

Here is what we ended up with by Sunday night: