Things have been hectic the last couple of weeks – too much going on at work, plus we helped Rachel, Zach and Toben move to Ohio this weekend.  They have a beautiful house and barn outside Mt. Vernon, about half way between Columbus and Cleveland. 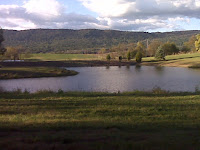 But we still found time to work on our farm, mostly we spent the last couple of weekends cleaning up around the pond.  We cut down the remaining willow trees and pulled out their roots as best as we could.  Since we have had such a terrible long dry spell, the water level was at a record low – which allowed us better access to weeds around the banks.  We weed-whipped around the pond, push-mowed and removed all weeds, including the wild roses and poison ivy!  We also pulled out the old boat dock, which jutted out into the pond – but it was rickety and not too safe.  Taking advantage of the low water level, we cut off the decking portion, hooked it with chains and ropes to the high- lift of the tractor and lifted it off – after some creative sawing, the former dock became a front porch on Lars’s playhouse in the woods. The pillars from the dock (old telephone poles) were pulled out with the tractor, and we will re-use them for trellises for either the grapes or blackberries.
Jeff cut down both corn fields, and plowed the lower one under – this will be a section of the 2011 blackberry patch.  We still need to finish plowing the remainder of the field.  Tina weeded and hoed the blueberry bushes – we lost two of them (too many weeds and not enough irrigation we think).  Will need to replenish those.

Also started doing serious research into current cover crop recommendations to get the 3 acre field ready for grapes. Found a lot of very useful articles online, also got a number of articles on winery equipment and overall setup.  During the last few weeks we also worked on the online course offered by the Alcohol and Tobacco Tax and Trade Bureau (TTB)  called the Wine Industry Compliance Seminar.