We spent most of this afternoon working in the “vineyard”, tying those grape vines that are long (and strong) enough to the next level wire.  We used different tools and materials to do this.  Jeff prefers a  traditional tying tool, which has a hook that twirls wire around the vine and trellis. The spool of wire attaches to his wrist, and Jeff  can tie a lot faster
than his two helpers.  Tina has been using a  “twisty tie”  type material and just cuts lengths of this to use on the grapes.  Both of these wires will deteriorate after a few months and naturally fall off the trellis, making the next pruning season easier.  Lars uses “zip ties” for the tricky branches that need more support – those ties need to be cut off in the fall. 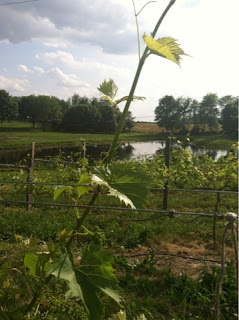