We planted nearly 2 acres of grapes today, the majority – 550 – at Zach and
Rachel’s farm just down the road, and then just 200 at the Long Shot Farm.  We had a better system  than in past years, and it went rather quickly.  Jeff made deep rows with a large single plow blade.  (We had already measured and placed posts to mark the rows on both ends).

Jeff used his deep sea fishing rod, which is over 12 ft long,  and duct-taped it to the tractor, so it stuck out 10 feet (the distance between the grape rows).  He had a string with a sinker at the end of the pole, which basically was centered above the previous row while he made the next furrow, so the spacing between rows remained a constant 10 ft.

We then used marking spray paint, and a “measuring stick”, to mark each spot where a grape had to be planted.  Lars, Jens and Zach alternated with marking spots, digging out the hole within the row a bit deeper, and planting.   Rachel and Tina helped with planting, and trimming roots, and Toben and Fiona dropped trimmed grape plants by the marked spots.

After the grapes were planted, Jeff used his “home-made” hiller – which consists of 2 disc blades mounted on a frame in the exact distance needed to disc/hill the grape rows shut, while straddling the grape plants. 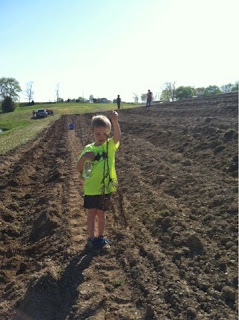