Duff and Leif set about getting their field north of Possum Lake ready for summer. They have several rows of Traminette vines that were planted last year, but due to a bad case of downy mildew at the end of last summer (which had a never ending monsoon of rain, great for fungal diseases!), the vines had lost almost all growth.

Beyond the mildew, one must also contend with the voracious appetites of the Cumberland County white-tail. One would think that with the fields of oats, wheat, soybeans, hay, and sweet corn that cover Cumberland County, plus the odd manicured lawn, the deer would not have much use for grape vines. But as Duff’s father would say, that’s what you get for thinking. Deer will try and eat whatever is before them, even if they don’t like it, out of sheer boredom it seems.

This year is going to be different! 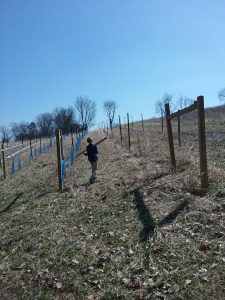 First Duff taught Leif how to trim back the vine to three or four healthy buds.  As it is early spring, the interior of the cane where it is still alive is green. Often there would be up to 6ft of dead vine from the downy mildew before one started finding green stem. After Leif got the hang of finding the living part of the vine, he would count three or four buds up from the roots, and prune the rest off. This was so the plant would focus its energy in making those few buds into long canes, not making 10 or 20 short little ones.

Meanwhile, Duff played John Henry, pounding oak stakes next to all the vines. This is for deer. Well, not so much for the deer, but rather to spite the deer. Tree tubes are placed next to the stakes and around the vines. The top of the tube is zip-tied to the oak stake. The base of the tube is buried mulch, and the vine after being trimmed is at the bottom.

Leif was a real trooper, and due to exercising at 7000ft regularly, thought running the oak stakes and tree tubes up and down the rows was easy work, even with the hard winds coming off the mountain. Enough light can still get through the blue tubes for the plant to grow.

So far, the deer have not taken to eating plastic tree tubes, which will protect the poor vines up until at least mid-summer, when the vine should poke out the top. When coupled with a bit more judicious spraying and a bit less rain, the vines should do well.