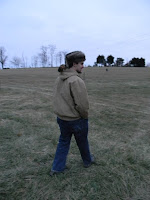 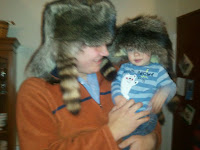 Anja and Duff as well as Zach, Rachel and Toben arrived on Monday before Christmas – which gave us several days together to prepare for the holidays.  Jeff really wanted to have someone get excited about his tanned hides and he managed to talk Anja into trying to make hats out of the tanned raccoon furs.  After doing some research on the internet and coming up with a pattern, the two of them spent 2 days with Tina’s sewing machine and managed to produce 7 raccoon hats of various designs.  Each of the hats took two hides and all of them were lined with flannel.  Since two hides were used per hat, they ended up with extra tails – which resulted in some rather unique hats. 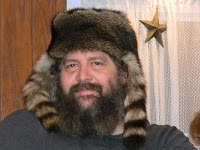