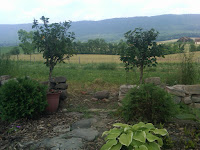 Well, it’s not much progress… but I took some time this evening while everyone was at the movies, to work some more on my stone wall.  This wall is eventually supposed to be the border between the backyard and the blackberry patch – without being too obtrusive.  I build up a small section from the picket fence to where the walkway starts.  On the other side of the walkway is the spot where Duff and I had started the stone wall last summer.   I put my hibiscus trees on each side of the walkway, and planted one of the small cedar kind of bushes that were originally planted around the house when we bought it.  I had already started making a shady border in front of  the “pretend” stone wall last year, with all my transplanted hostas from the old house, a couple of ferns, bleeding hearts and some lily of the valley plants.  This week I added some more plants:

Jeff helped earlier in the week to pull out one last stubborn tree root (with Zach’s tractor), so there is no more barrier to continuing the stone wall building project – except finding the extra time.  Also weeded the flower beds alongside the house, where the lilies started blooming. 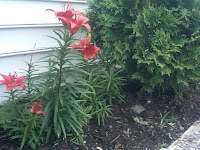