Skip to content
Chronicles of the Long Shot Farm > DIY > Making a Viking Hat – ala “How to Train Your Dragon”
Share:

Probably one of our most favorite animated movies ever has been “How to Train Your Dragon”.  One of the scenes, where “Hiccup” gets his first viking hat, has been the inspiration for our creation of this toddler sized version.

Before describing the assembly of this hat, it is important to recall the scene where “Stoic the Vast” (Hiccup’s father) hands his son the hat… pointing out that is has been fashioned out of half of his mother’s breast-shield  (and thus matches his father’s).

We made this hat entirely from items “found” around our house and yard:

Assembly:
Cut one of the cups off the bra and paint it with fiberglass resin.  Let dry (following directions)… we let ours dry overnight.

Fill cow horns with body filler and let harden.  Mark position of horns on “hat”, and from inside, hold a fender washer and screw drywall screw through washer into the center of the cow horn.  Repeat on other side.

Cut off sections of the back of the bra with the hook and eyes and glue into position on the back part of the hat (for adjustable straps).  After gluing, sew on permanently with needle and thread.

Cut left over fur into narrow strips and hot glue into place for decorations…and voila: 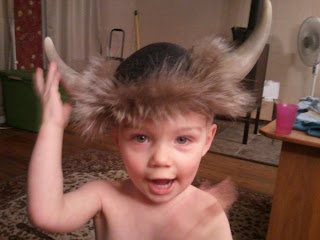 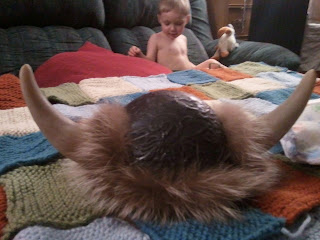