Skip to content
Chronicles of the Long Shot Farm > General > Getting Ready to Renovate the Little Shed
Share:

Jens and Grace came over to help Jeff with the pointing in the barn today- they are making progress, despite the colder weather. The rest of us, including Anja and Duff, spent most of the day completely emptying out the shed across the street. The plan is to rewire and then insulate and dry-wall the inside, making it our weaving/sewing/quilting and arts room.
Duff found an old shot put ball, into which Jeff had screwed an eye hook (he used it as a boat anchor for a while)…Duff attached a chain he found and “played” in the snow – flinging it as far as he could: 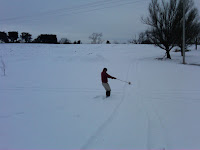