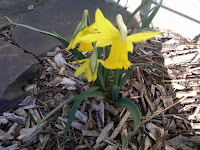 Not only did we have a relatively mild winter, but also an unseasonably warm February and early March.  Last Thursday, the temperature crept up to 68 degree F and for next week, the forecast predicts temperature in the upper 70’s….this is definitely causing concern for fruit crops, fruit trees as well as blackberries.  Warm weather will cause some trees and brambles to bloom early, making them susceptible to frost damage – and we still have 2 weeks of winter left!  According to the National weather service, temperatures have been running nearly 6 degrees above average in February, and more than 4 degrees above average already in March.  But – the warm weather is great for getting a head start in cleaning up flower beds, and even painting fences.  Today we planted two more fruit trees –  Stanley Plums, there were a Christmas present which arrived via courier on Friday.