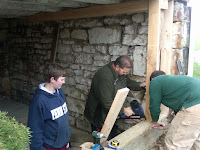 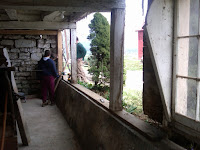 After preparing the inside walls all week (jacking up the outside corner of the barn, cutting new posts, and cutting a load of 2×6’s for supports), we spent Saturday and Sunday tearing off half the downstairs wall of the barn. The new posts and supports were set, and the jacks carefully removed.
Jeff, Jens and Lars worked most of the weekend on this.  By Sunday afternoon, half of the wall had been rebuild with sheeting, and the new windows were studded in and installed.  Hoping to get the remainder of the wall rebuild next weekend.  While this was going on, Tina raked up all the left over gravel in the yard and dumped over a dozen wheelbarrow loads along the swampy edge of the lower pond.  Also rototilled the first segment of the “barnyard”, spread grass seed and covered it all in straw and soaked it, even through it drizzled all day.  And we got some weeding and mowing done, and cleaned up a lot of the brush and old wood, which Jeff had cut into firewood-sized pieces.