The massive hurricane, properly called “Sandy”,  left our part of Pennsylvania relatively unscathed.  We were truly very, very lucky, especially when compared to the devastation the storm brought to the coastline, just a few hours east of us in New Jersey and New York.

We had some issues with our power, it was off most of the night on Monday.  We played Monopoly with oil lamps and candles and then we all slept in the living room, as we had the back-up gas heater running.  The electricity came back on around 7, just in time for everyone to take a shower, and then it was back off by midmorning.

We had some trees uprooted (just small ones in the fence row), and a lot of small and mid-sized branches all over the place.  The only real damage was to the back of our barn, where about 20 boards got torn off, and the vent on the very top of the barn got knocked out as well.  Everything that was stored on that side got rather wet, but it was mostly our unused stainless steel tanks and stacks of lumber – so it could have been worse.

The damage was toward the top of the barn, so we had to get some help to get this one fixed.  Our friend Mike, who happens to run a construction business, managed to squeeze us into his schedule today.  He brought scaffolding and ladders – and not only replaced all the boards, but re-nailed all the existing boards as well.  Lars climbed up on the scaffolding as well – Jeff stayed on the ground, cutting boards to length. 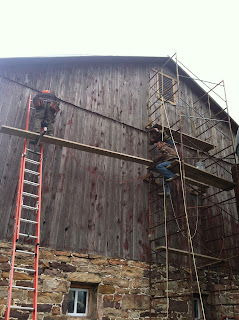