Last year, we lost of lot of our first potential harvest to a flock of migrating black birds – something we are trying to avoid at all means this year.

We had looked a different types of vineyard netting but they tended to be rather expensive, so for this year, we purchased a 7000 ft long  and 5 ft wide roll of nylon netting used for round hay bales.  Jeff build a “spool box”, which we mounted on the back of the four-wheeler. Jeff also made a box full of small “S” hooks from left over fence wire (while watching a movie).

We fastened the netting to the end post of the row, and then while Jeff slowly drove the four-wheeler, Lars and Tina unrolled the netting and fastened it with the “S” hooks to the top trellis wire.  It was easy to keep up with the slow speed of the four-wheeler.  We put the netting on both sides of each row, and it took us about 2 hours to finish all 5 rows (200 vines).    We should know in a few weeks if this method is successful – it certainly was easy to put up and not very expensive to do, and we have enough netting left to do twice as much. 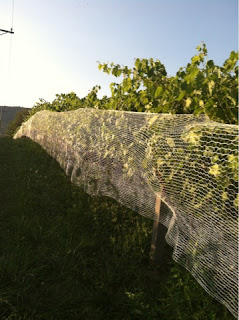