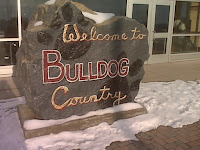 We spent nearly the entire weekend at the High School gym with the junior bulldog wrestling team.  On Saturday, our school hosted the weekly Central Pennsylvania Youth Wrestling League match for five of the 19 participating schools.  We started setting up for the match at 7:00 am and were there until the very last match of the day, around 4:00 pm.  On Sunday, we hosted the “Dog Duals” tournament, for 7 junior traveling teams.  With three mats, we had six teams wrestling at one time, while one team had a break.  Official “weigh-ins” started at 7:00 (we cooked breakfast for the wrestlers), the actual tournament started at 9:00 and lasted until 5:00.  The Big Spring Bulldogs got third place.

We also started to jack up the barn beams, in the one section where there was noticeable “sagging”.  Right now, we have temporary posts holding that section up, until we can get it to the correct height, and until we know where we will put up walls, then we’ll place permanent support posts.

We also placed our order for another 500 blackberry plants – this time we chose the thornless “Triple Crown” variety.  They are supposed to be shipped the first week in March!