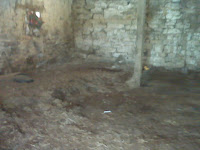 It took four wagon loads of old straw, hay and crusted manure to get the barn floor down to the hard dirt level.  We had to use the small rototiller to dig out the very last layer (and this was only for one third of the barn floor, as the rest of the floor is cement). 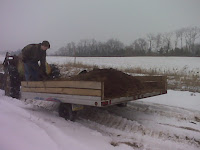 The four wagon loads were spread on the garden – which means we not only had to shovel the stuff onto the wagon, but shovel it back off as well. 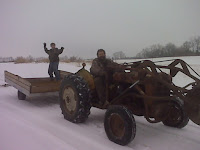 Lars had two snow days in a row and he worked hard at it – but had some fun too! 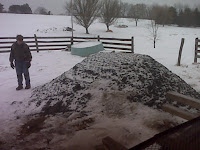 We had ordered 15 ton of gravel, which was delivered earlier this week – and now the hard part starts:  spreading the gravel in the barn with a wheelbarrow and help from a laser level.  What fun!