Skip to content
Chronicles of the Long Shot Farm > Barn > Filling in the Barn Floor and Setting Posts
Share:

On days that the weather was warm enough to melt some of the gravel, Lars and Tina filled up wheelbarrel loads of gravel and carted it into the barn – where Jeff distributed it and tamped it down.  We are over half way done – and so far pushed 70 wheelbarrel loads (yes, we counted!!!).

﻿Once the back third was gavel filled and leveled (we used our handy laser level to make sure it stayed even), we mixed up some cement and poured two slabs (into a form which Jeff had build), as bases for setting new support beams.

While the concrete hardened, we started jacking up the barn some more to get the cross beams level.  We had borrowed two barn jacks from one of Jeff’s friends, and eased up on the cross beam a little bit each day for about 1 week, until it was level – we had to move it up nearly 2.5 inches at the far end, about 1 inch in the middle. 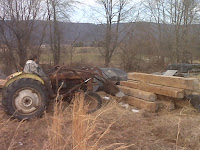 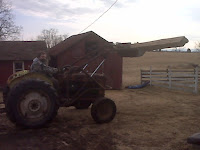 We used some of the old (Beford) barn beams we still had left over, cut them the right length and set them in, next to the old beams.  To get these in, we had to jack the crossbeam even higher, until we could slide the new support beams in, and then lower the jack until the new beams were able to support the barn.  It felt a bit like playing JENGA, as the old beams toppled. We set 6 new posts so far, for the back third of the barn, and it looks great!
﻿﻿
﻿﻿﻿﻿﻿﻿﻿﻿﻿﻿
﻿﻿