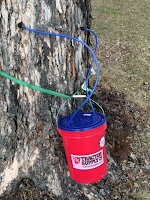 Jeff had the brilliant idea to try and make his own maple syrup ever since he saw the sugar maple trees on Zach & Rachel’s Farm.  So he researched the process in more detail, ordered the necessary supplies (tree taps, hoses) from Amazon…yes, they have that too! And we bought some more food grade buckets with lids.  Then Jeff and Lars tapped 5 trees, hooked up the hoses and started collecting sap in the 5 gallon buckets.  They checked the buckets every day and over the course of 2 weeks collected nearly 100 gallons of sap.

The first weekend we used our pig roaster, which has a stainless steel trough, to boil down the sap until the 50 gallons were reduced to about 3 gallons.  We transferred the 3 gallons to our largest stainless steel pot and reduced those even further, to about 4 quarts.  We used a thermometer to measure the exact temperature of the sap at all times.  Our water boiled at 211 F, (we double checked it to calibrate the thermometer), and we boiled the sap until it reached 218 degrees.  After this, we transferred the syrup into 2 half gallon jars and let it cool down and settle, to allow the clear syrup to separate from the “sand” (the left over mineral residue).  We used our wine equipment to “rack” the clear syrup off the residue. 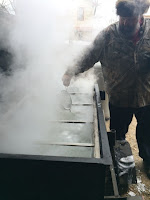 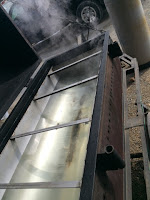 The following week, we collected the sap more frequently, and all of it was boiled down in our large pot.  All that yielded another gallon.