Skip to content
Chronicles of the Long Shot Farm > Barn > Cleaning the Barn (and Skating)
Share:
﻿Ever since the Christmas break, we’ve been working on cleaning out the bottom of the barn.  Not just shoveling out manure remnants, and carting ancient garbage, hardened cement bags, baler twine and rusted fencing materials, but also disassembling the milking stanchions, horse boxes, feeding troughs and various gates.  Over the weekend, we had someone come in with a trailer to haul all the metal away – he had to come back with a second, larger trailer, because he did not expect us to have so much junk – after all, the barn is not that big.  We even found a full sized, rusted shopping cart, not to mention all the rusted feed carts, chains and useless hardware pieces.  We started yet another burning pile for all the rotten boards and feed sacks and added nicely to the compost pile with the old bedding material.

﻿After all the trash was out of the barn, the tearing down of the partitions and reclaiming the lumber (mostly solid oak – just had to get the nails out) was relatively fast.  We now have open space, except of course for the load-bearing posts.  Two thirds of the barn floor is cemented – but not evenly, as there had been a milking set up – so the floor has three levels, like steps.  The last third had been horse boxes, and had about 1 foot of tramped down bedding and straw in them.  That section has to be dug out some, and then cemented – but first we have to lay out where the water and drain pipes have to be positioned before we can even think about cement.﻿﻿ 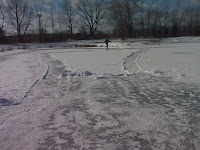 We had some fun the last few weekends skating on the pond.  It got a little more challenging after the ice got covered with snow – we had to shovel a skating area and also a large loop for skating laps (which is a lot more fun in cold weather than running on snow covered fields).  The only challenge was that the ice on the pond is rather bumpy, with holes ever so often, which makes skating a bit more challenging – but still, so much fun 🙂
﻿﻿