Seems that I get the sudden urge to knit every year around Christmas time – it becomes an obsession, and there is nothing like the approaching deadline of holiday gift-giving to finish projects.  This year, I became fascinated by fingerless gloves.  They don’t take too long to complete and it is fun to experiment with more intricate lacy designs.  Most of the patterns I used came out of  the “One Skein Wonders” book, though I also found patterns in some of my older knitting magazines.  Here are some of the gloves I finished in Decembers:

When Anja and Duff moved to Boston, they took their ancient “college car” (which had preciously been Samantha’s “college car”) with them, but quickly realized that it would be nearly impossible, or at least not economically feasible, to get it inspected to meet Massachusetts standards.  They also realized that with a brand new baby – and future trips to Pennsylvania and Mississippi – it was finally time to buy a new car.  So they did – but parking regulations in their new home would not allow for more than one car. And Sammy kind of wanted her old car back.  Which meant we had to get it before the temporary parking pass ran out in Boston.

So Tina took the night train, from Harrisburg to Philadelphia and then another train to Boston.  (Which was not so bad – however, the train was surprisingly full and only aisle seats were available.)

We had a great weekend together in Boston and Tina got to babysit Leif for nearly 4 hours on Sunday.  This was a rather easy task, as Leif seemed to think that everything Tina said was just funny.

We went for long walks each day, the weather was absolutely gorgeous and we even got to visit Duff’s new office at MIT.   Leif was just the happiest baby the entire time.

In the evenings we watched Episode 3 of the first season of Sherlock Holmes and Episode 1 of the second season, which gave Tina enough time to knit a happy red winder hat for Leif:

On Monday, Anja tried for the first time to feed Leif some rice cereal and he did surprisingly well!

Really had fun knitting more hats – (should not have bought a hat knitting pattern book), but worked on the weaving as well, since it still gets dark pretty early in the evenings. 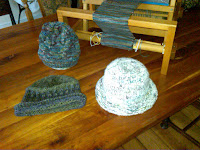 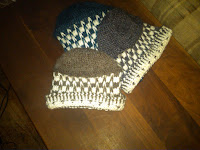 Since it is still wrestling season, most weekends are swallowed up by tournaments, which has always been a good time to get caught up on knitting… Finished three hats this year already:

This afternoon Anja and Tina spent some time weaving:  a scarf on the small loom, and more place mats on the large loom: 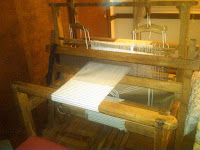