We took advantage of the vacation time between Christmas and New Year to finally paint our hallway and give our bedroom a makeover.  Both areas still had the original paint from when we bought the house: the bedroom was orangy/mustard kind of shade, and the hallway was an off white. All the rooms had a flat finish, which was impossible to keep clean, and the and window frames were a bright white.

The new hallway is now painted in a shade called “spiced vinegar”, which is from the natural color palette  by Olympic paints.  Pretty neutral, but welcoming.  The trim in the hallway is a warm, off-white shade that matches the trim in the rest of the house.  We chose a semi-gloss finish and are really happy with the end result.

Our bedroom was the biggest improvement.  We used a green shade, called “Sweet Annie” (namesake  of the herb),  for the walls.  All the moldings and window frames are painted in “Toasted Almond”.    (We had already used the “Toasted Almond” for the walls in the master bathroom a few years ago).   Both of those colors are also from Olympic paints – from their traditional color palette.

We made absolutely delicious dried apples in our dehydrator today – and it was the easiest thing to do.  We used the apple peeler to peel and slice the apples – this way the slices were of a very consistent thickness.  We placed the slices on the trays and sprinkled them – lightly –  with a sugar/cinnamon mixture.  It took about four hours until they were dried…and delicious.  We ate half of them this evening already.  What a treat!! 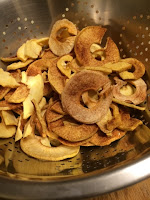 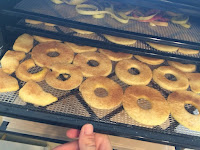 Samantha got us a “kick-ass” dehydrator for Christmas. The first thing Jeff made in it was – of course – deer jerky, which turned out great. 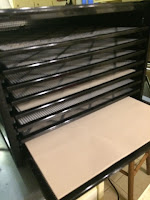 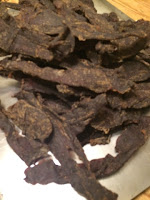 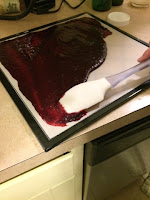 But then we experimented with making fruit leather – the fruit roll-up kind of snacks.  We thawed out some of our seedless blackberry puree (the same kind we use for making jam), and then cooked it with SureJel and sugar, only we used more than twice the amount of fruit than the jam recipe calls for.  This thickened the puree enough to be able to spread it on the trays of the dehydrator.   I should mention that we got non-stick silicon sheets for the trays – which was very helpful.

We also spread out some of our homemade applesauce on two additional trays.  We let the fruit dry for about 8 hours,then peeled them off the sheets onto a cutting board.  We then sliced and rolled up the dried fruit puree.  They turned out really well, more tart than sweet, and absolutely delicious!

Dresses for Little Girls and Their Dolls

And some more doll outfits:

This year’s holiday sewing projects were (as always) a lot of fun.  I made my first ever Christmas tree skirt, based on a relatively simple quilt pattern that used “thangles” paper to ensure perfect HSTs (half square triangles).  I found beautiful fabrics with gold on white patterns at the Smile Spinners sewing store in Perry County.  The entire project only took a few evenings of sewing as I machine quilted the tree skirt. 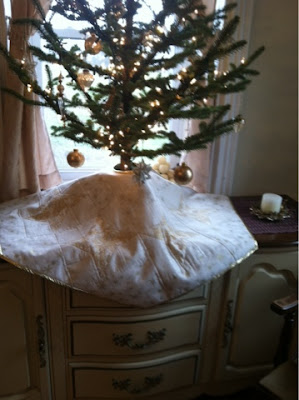