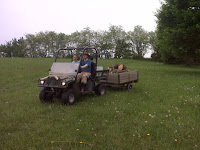 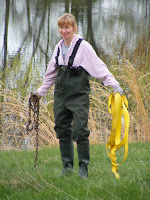 This past weekend we worked on cleaning the pond – around the edges and the water.

Jeff sawed off a lot of the willow trees – which not only grow around the edge, but also grow in the water. He cut the larger pieces into firewood (which Anja and Duff carted away and stacked), and we made yet another burning pile for all the smaller branches.

Then Jeff had the great idea of trying to pull those willows, which were actually growing in the pond, out with his tractor – Tina had to borrow Anja’s fly-fishing waders to go into the water and hook ropes and chains around the tree trunks….this did not work too well – so we went back to sawing them off where possible. 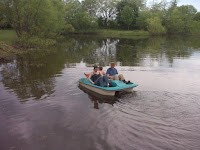 At the end of this rather exhausting day, we hung out at the pond and enjoyed the peaceful afternoon. Anja and Duff took a ride in the paddleboat. 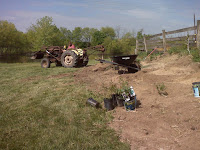 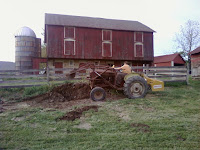 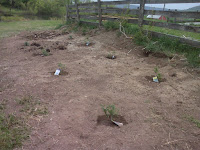 On Saturday we added a blueberry patch to our collection of small fruits. We planted them in front of a fence by the barn, that had been home to a large compost pile. After leveling the compost and working it into the ground, we dug holes for the 12 plants, and watered them with an acid fertilizer. We added a mixture of peat moss and potting soil into the holes and around the plants, which were two year old bushes. We’ll keep working on that ground to keep the pH around 4.7%. We chose to put the blueberry patch in front of an existing fence so that we’ll only need to add a few more posts in order to fence it in and cover the bushes with netting, once we actually have berries. We ended up planting the following varieties: 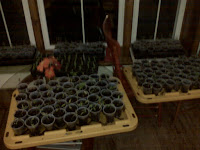 We used 8oz clear plastic drinking cups, Jeff made holes in the bottom by heating a nail on a torch, then added regular potting soil around each seedling. 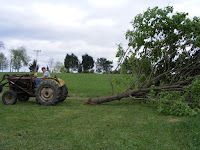 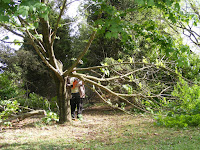 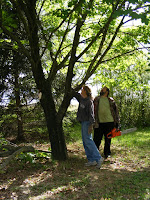 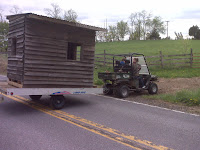 Today we finally moved the former “treehouse” to a useful location. We decided to put it into the grove of pine trees which is located at the far corner of the pond-side of our property. But first we had to do some tree trimming to make space for the treehouse – now called the playhouse. Then we carefully loaded the playhouse onto the trailer (with the help of the tractor), and pulled it with the four wheeler across the street to the new location. 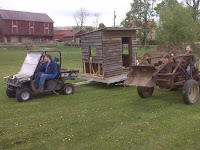 Then we had to move the base ( the deck portion of the playhouse which used to be anchored between the trees) – Jeff did this with the tractor. Once the base was where we wanted the playhouse to be, we backed the trailer to it and tilted it (again with the help of the tractor) and slid the playhouse onto the base. After the playhouse was positioned on the base, Jeff used the tines of the tractor’s front bucket to lift first the front, then the back – while Zach stacked cement blocks under the base to make it level.
The playhouse still needs some boards replaced, and screwed to its base + a door and windows, and the railing…and maybe some front steps and a little deck – and a firepit…maybe some benches….
After all that, we planted the extra 20 pine seedlings we had gotten to make the grove of trees a little larger. 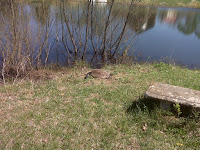 We have a pair of Canada Geese who made their home on our pond and started a family. We are calling them Henry and Henrietta. 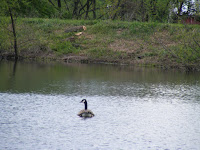 Henry usually swims on the pond, on patrol it seems, while Henrietta guards her nest of eggs – which is right next to our stone bench.

Henry does not like it if we get to close to the nest though, so we have to be
sneaky in order to get a close-up photo. Even up close, it is difficult to see Henrietta on her nest.